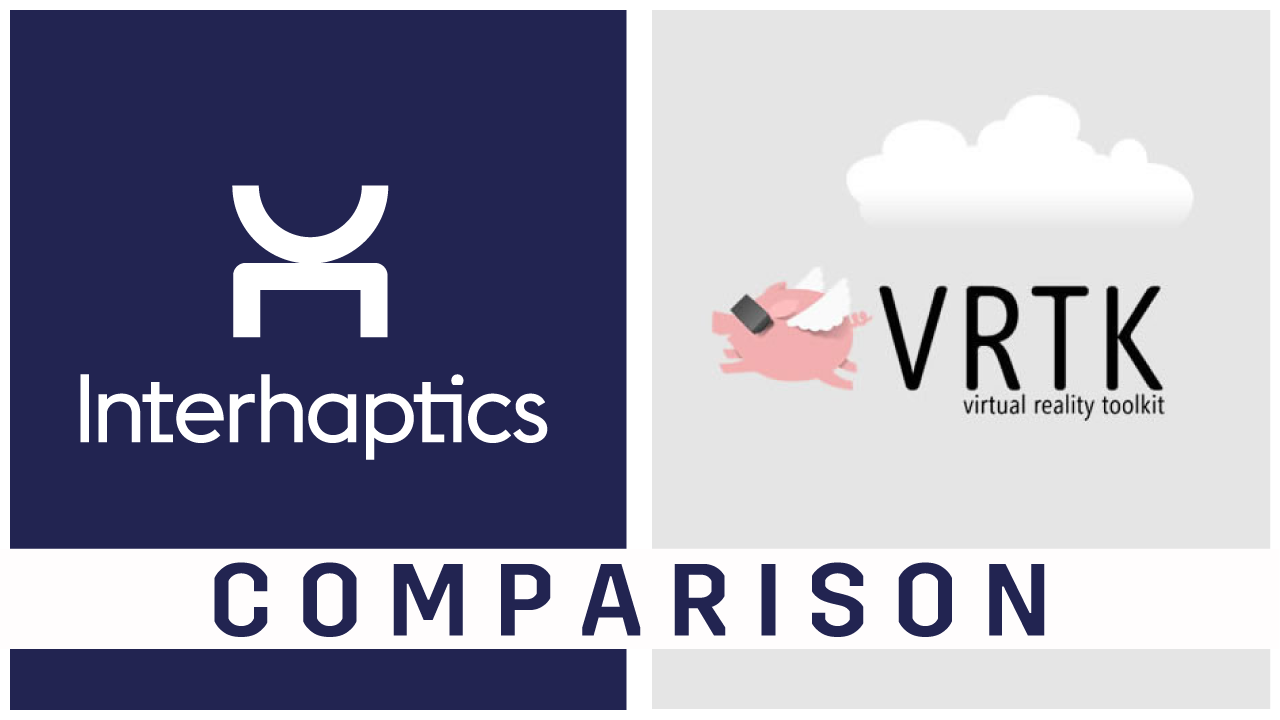 VRTK is probably the most known open-source toolkit for VR solutions creation. It is currently in the beta process of its 4th major version.

In the next paragraphs, you will find a breakdown of its characteristics, and full a comparison between two hand interactions tools for VR/AR/MR: interaction builder and the VRTK.

VRTK is a comprehensive and complete development framework for XR applications. Indeed, it includes a lot of features and scripts to address the development needs. The drawback are the steep learning curve, and the legacy development mechanism to fully understand the whole architecture. Moreover, a lot of these scripts are utility scripts for specific needs. This means that you do not necessarily need to know everything to be able to build your VR solution.

One part of the characteristics of this hand interactions tool for VR/AR/MR is its management of the project/scene for specific platforms (Oculus, Vive, etc.). It is required to set up tracking, bindings, and several SDKs if you want to work on multiple platforms. Like every open source project, several of its scripts are interdependent and they require some time to fully understand how to combine them.

On the other hand, the second hand interactions tools for VR/AR/MR is the Interaction Builder. Compared to VRTK, as we specified in our MRTK comparison, the tool has far smaller architecture. Indeed, it removes the extra utility tools to focus on an interaction development system, which is easy to use. The system is completely focused on a painless and streamlined development process. Furthermore, you can port your application in 2 clicks between several different XR platforms.

Thanks to the release of the Oculus Quest, one of the most popular UI in XR today is the hand tracking input. VRTK, as other existing hand interactions tools for VR/AR/MR, is built around logic input from controllers. The system is technically compatible with hand tracking, but it is not natively supported. Developers need to build or find an extra module to make the bridge between the analogic hand tracking and the logic controller input.

The Interaction Builder is built specifically for hands interaction, which makes the integration of hand tracking, snapping, grabbing much easier. It now supports Oculus Quest, HTC Vive and UltraLeap (former Leap Motion) systems of skeletal hand tracking. Thus, it is great for interactions based on realistic, and customizable, hand poses. This allows Interhaptics to cross-compile between platforms. Indeed, the same application is compatible with hand tracking and controllers without any issue.

The VRTK is it is pretty similar to the VR Interaction Framework comparison. Indeed, this hand interactions tool for VR/AR/MR proposes a simple grabbing system. This system can be coupled with the physic engine of Unity, in order to define the desired behavior of the interaction you are creating. Moreover, the VRTK proposes pre-made assets to skip the setup of specific interactions (like doors, drawers, etc.). However, to fully manage your creative and development process, it is necessary to learn how to use joints. Furthermore, you need to deal with physics to create the specific interaction you want. The implementation of physics in the process implicates that you pay attention to the system physics to avoid any stability issues.

On the other hand, the Interaction Builder is based on a logic engine. Thus, it avoids the learning curve of the physics implementation, without giving up the extreme customization of your creations.

The hand interactions tool for VR/AR/MR includes the precise mathematical definition of how several interactions will behave in the 3D environment. This allows Interhaptics to include a more advanced event system due to logic-based interactions.

To add more details, VRTK includes start interaction and end interaction events. However, the Interaction Builder covers everything that happens between the start and the end: constraints reached, target reached, the specific value on a slider, etc. Click here for more information!

Comparison table between VRTK and INTERHAPTICS

The VRTK suffered from a loss of popularity and slow development progress. Nowadays, it is a bit behind comparable hand interactions tools for VR/AR/MR (for instance the VR Interaction Framework or MRTK) in terms of features and UX. However, the 4th version which is currently under development will add new functionalities. Thus, good things might appear in the future to restore VRTK’s notoriety. If you are not planning to develop for hand tracking, it is still an efficient toolkit to use with large platform incompatibilities.

If you are looking for an easier and simpler development solution that is specifically built to meet new technologies such as hand tracking, choose Interhaptics. Develop your experience & deploy it everywhere in a few clicks!