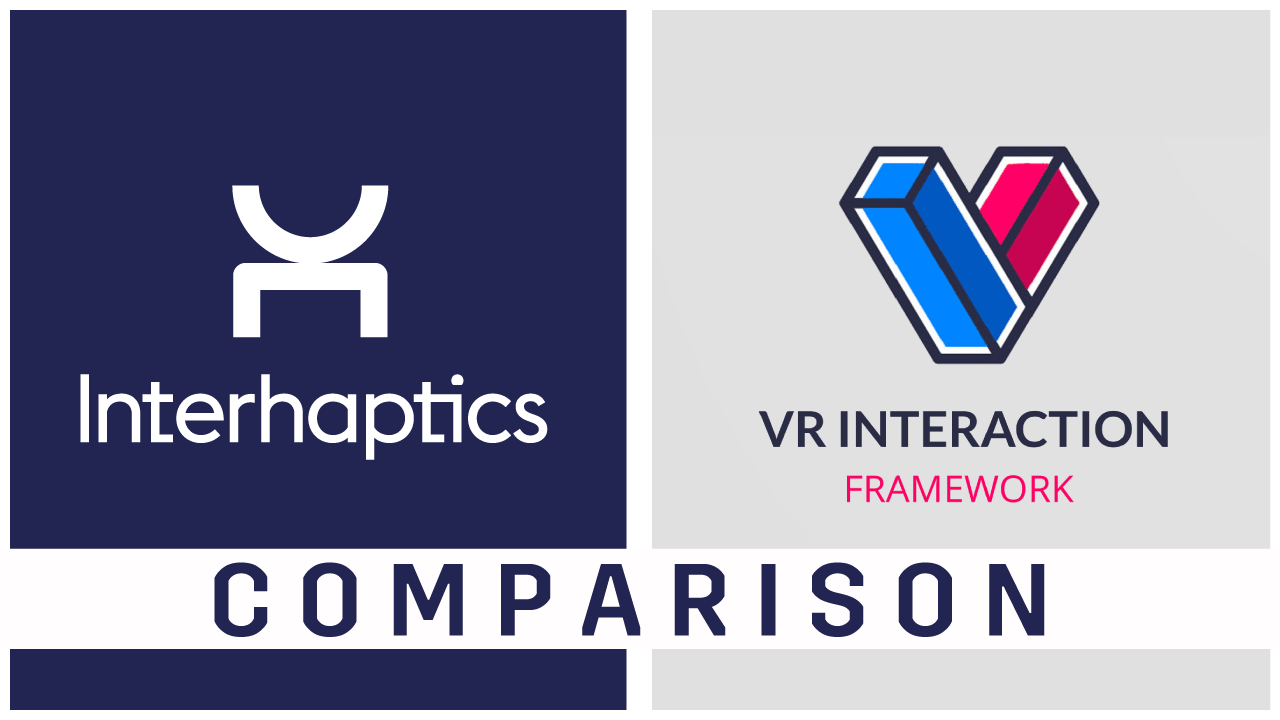 The market in terms of VR creation tools is constantly expanding with more and more valuable offers for hand interaction for VR.

Therefore, it may be difficult to understand different products, in order to find the one that would suit your project best. To discuss this point we will compare two apparently similar products that you can use to create interactions for VR content. The first one is the VR Interaction Framework, a well-reviewed Unity Plugin known to be user-friendly, and the second is the Interaction Builder from the Interhaptics.

Why these two systems for hand interaction for VR?

Because they are similar in many points, such as framework complexity, coding complexity, and what value they aim to provide to developers. Both are built on 3 pillars: define an interactive/grabbable object, the body part/grabber, and the events related to each interaction. This is fundamental for hand interaction such as hand tracking, snapping, and grabbing in virtual reality. Whether it is with the Interaction Builder or the VR Interaction Framework, you need little coding knowledge to understand the system and create interactions. However, you will always have API/framework access to go more in-depth during your development process.

Specifications of the two technologies for hand interaction for VR

Starting with the VR Interaction Framework, you will find an easy-to-use grabber/grabbable system for hand interaction for virtual reality. However, the system is not optimized for precise hand interaction for VR but works well for any interaction based on grabbing. Also, it is not focused on hands. Indeed, there is a dissociation between “what is a hand” and “what can grab” which gives some flexibility.

The VR Interaction Framework is mainly using button inputs to trigger interactions and events during interactions. It is also compatible with Oculus Quest hand tracking (precisely the Pinch input to simulate the grab). However, there is a loss of consistency between the hand tracking input and controllers’ input.

The interactions are half logic-based and half physic-based. Interactions are triggered logically (with a specific input/value) but the behavior of the object is managed by the physics engine. Thus, it requires a bit of extra preparation on the object itself, with physics components such as joints.

Interaction Builder gives a realistic representation of a “grab” and makes these interactions work consistently with both hand tracking for virtual reality and controllers. Everything is computed in a logic engine. No complex physics component is required to create an interactive object (usually you would use physical joints and configure them).

Each hand interaction for virtual reality is triggered logically. Moreover, also the behavior of the object in the 3D space is logically managed. Therefore, you just need to apply a script and the object will behave as it should.

A small detail that is actually important in terms of user experience is the differentiation between big and small objects. It was a necessity since we don’t grab objects the same way depending on their size (have more details about different ways to grab here). This is a very important feature to have in hand interaction for VR.

If your project does not require fully realistic interactions and has more of a gaming approach, the VR Interaction Framework will easily help you in that way. Specifically, it is the right system if you want to fully work in a physics-based environment.

However, thanks to its concept around the hand and a logical engine for stability, the Interaction Builder would be the right choice for any serious game, business, or professional training. It is the best solution for any VR content requiring realistic hand interactions or content around Hand Tracking for VR. Also, if you do not want to learn and spend time on the physics side of interactions, the Interaction builder will handle everything for you in a logical engine.